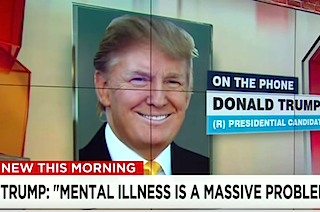 GOP presidential frontrunner Donald Trump is usually quick to weigh in on whatever the big news story of the day is, but he was uncharacteristically silent yesterday about the deadly on-air shooting at WDBJ in Virigina, even while most of his rivals sent their “thoughts and prayers” to the victims’ families. But the candidate finally gave his reaction this morning during a phone interview with Chris Cuomo on CNN’s New Day.

Trump chose to focus on the “mental illness” issue as opposed to guns, calling a lack of treatment for people like the shooter a “massive problem.” But Cuomo attempted to push Trump to tackle the gun issue as well, appealing to his reputation as an outspoken figure who’s not afraid to alienate people with his positions.

“Do you think it is time to do something else about guns?” Cuomo asked. “Nobody likes to talk about it. People say that this is an inappropriate time, and then those who experience say it’s the most appropriate time. Would you do something different with gun policy?”

“Well, I don’t think I would, but this is a really sick person,” Trump replied. “This isn’t a gun problem; this is a mental problem.” He went on to describe other mass shooting scenarios in which he believes more guns, not less, would have been the best solution. “You’re not going to get rid of all guns,” he added. “So I know one thing, if you try to do it, the bad guys would have them, to use an expression. And the good folks would abide by the law; they’d be hopeless, and it just would be a hopeless situation for them. And I think it’s a big mistake.”

Before moving on, Trump reiterated that he is “very much into the Second Amendment” and does not think that any new gun policy is needed in light of this latest event and others.

As we learned this morning, the WDBJ shooter purchased his gun legally and passed a background check. So if this really is a “mental problem,” shouldn’t we have a background check system that prevented him from obtaining a gun?

Both Hillary Clinton and President Barack Obama delivered statements yesterday that called for action on gun violence prevention in light of yesterday’s shooting.