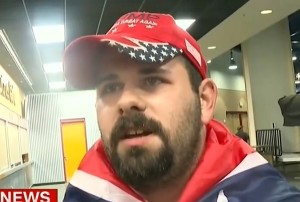 There was a bit of a commotion at a Donald Trump rally in Kissimmee, Florida Thursday night when security and law enforcement personnel had to convince rallygoers to take down a Confederate Flag emblazoned with “Trump 2016.”

Brandon Partin, the man who hung the flag, told CNN that he purchased it outside the rally, and explained that he thought that Republican presidential nominee Donald Trump would be fine with the display, because history:

Most people in our country don’t understand the full history behind the flag. So, I understand that the media and a lot of other people are going to turn it into something that it’s not, you know, say that it’s a racist thing or, you know, white supremacist. I am not a white supremacist. And it was about the North and the South. It wasn’t about racism at all. The North had African-Americans fighting for them and the South had them for them, too. So for people who spin it in that direction is just completely false.

…I think that on a personal level between my beliefs and Trump’s beliefs, I don’t think he would have a problem with it at all because he probably understands the history and that’s why we’re all here.

The Confederate Flag has loomed large in our politics, especially since the racist attack that killed nine parishioners in Charleston, South Carolina. Under intense public pressure, Republicans supported various measures to remove Confederate flags from public display, but have since backpedaled on some of them. Trump himself supported the decision to put the flag that flew at the South Carolina state house “in a museum,” but has received widespread support from pro-Confederate flag groups.