Trump Hits Back at Ben Carson: He’s the One Faking His Faith 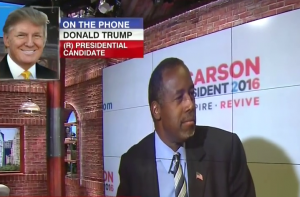 “He is a man of faith, everybody knows that,” host Chris Cuomo began. “It’s a cornerstone of his existence and certainly his motivation to run.”

“Well I don’t know that,” Trump responded. “I had not heard that. I have known of Ben Carson for a long time and never heard faith was a big thing until just recently when he started running. So I don’t know about Ben Carson’s faith.”

Trump went on to say Carson was just an “okay doctor” and told Cuomo to look into his record as a surgeon. “He’s got a lot of donors, a lot of people pushing him. But Ben Carson, you look at his faith and I think you’re not going to find so much.”