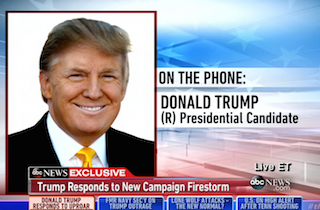 On This Week, Trump said the controversy had been ginned up by the media and a jealous pack of GOP rivals upset he was leading in the polls.

“This whole thing was brought up be a lot of people that are competing against me currently, that aren’t even registering in the polls, because a lot of people are tired of them,” Trump said, alluding to former Texas Governor Rick Perry, who called for Trump to exit the race following his comments about POWs. “They’re very upset that I’m leading the polls, by a large margin.”

Trump agreed with former CBS reporter Sharyl Attkinson, that the media was treating him “very unfairly.” (Attkinson insisted that Trump said the opposite of what everyone else heard.)

Trump reiterated that his real beef with McCain was that he was “all talk” on helping veterans, who would be treated much better under a Trump administration. He also dismissed scorching criticism from the heads of Veterans organizations, who called him a draft-dodging jackass. “Maybe they don’t speak to the same vets I do,” Trump said. “It’s a scandal, and John McCain has done nothing to help the veterans except talk.”

Trump added that soldiers who did not end up POW/MIAs got “no credit,” something at which host Martha Raddatz rolled her eyes.