Trump Mocked For Saying He Wasn't Mad at Schumer, Pelosi

Trump Mocked For Insisting He Wasn’t Mad During Schumer, Pelosi Meeting: ‘I SAID I WAS EXTREMELY CALM!!!’ 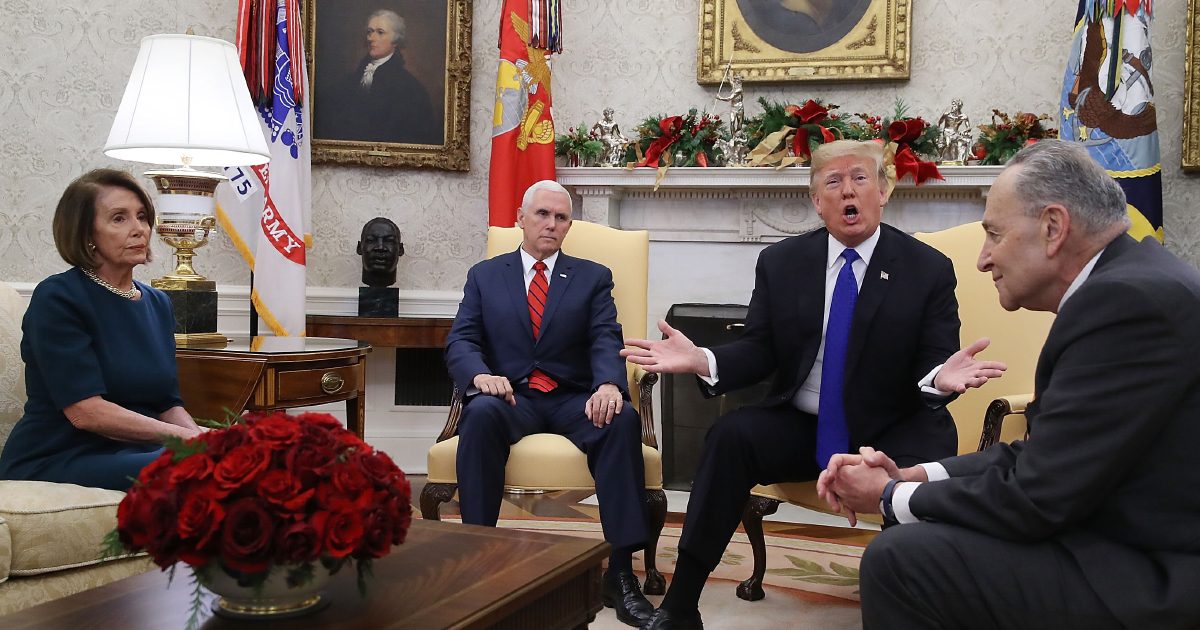 The Twitterverse is very skeptical of President Donald Trump‘s ongoing claim that he wasn’t brimming with anger when he aborted the infrastructure meeting he was supposed to have Wednesday with Nancy Pelosi and Chuck Schumer.

Ever since the meeting was canceled, the House Speaker and the Senate Minority Leader have taken turns saying Trump intended for the meeting to fall apart, judging by the “temper tantrum” of a press conference he held right after. Trump responded last night with a series of tweets wailing against his enemies while saying Pelosi’s description of his behavior was “such a lie!”

Today, Trump went at it again by blasting the “Fake & Corrupt Press” for reporting on how he supposedly raged at Pelosi and Schumer during their encounter.

I was extremely calm yesterday with my meeting with Pelosi and Schumer, knowing that they would say I was raging, which they always do, along with their partner, the Fake News Media. Well, so many stories about the meeting use the Rage narrative anyway – Fake & Corrupt Press!

As such, political reactors are looking at Trump’s tweets, and many of them rather doubt he can be in a good mood if he needs to keep saying he was “extremely calm.”

Trump’s second tweet making the same point about his behavior with Pelosi and Schumer. https://t.co/zelGdPvNpQ

Nothing says “extremely calm” like insisting multiple times on twitter that you were definitely extremely calm https://t.co/2jnDxcfVgF

Trump definitely not raging about reports that he was raging yesterday https://t.co/18lTQv6njI

“Hello darkness
My old friend.
I’ve come to talk with you again.” https://t.co/rnC192qG0M

President Trump insists he was not ‘raging’ yesterday when he abruptly ended a WH meeting with Pelosi, then called an impromptu press conference to complain that he is being treated unfairly. He was ‘extremely calm,’ he says today, 24 hours later. https://t.co/AoqWOjmSla

The nuclear codes are in the hands of a grown man who has called himself a “stable genius” and, right after calling his former Secretary of State “dumb as a rock, now insists he was “extremely calm” when he stormed out of a meeting.

I, too, tweet to emphasize how calm I was during a particular disputehttps://t.co/iXTeZzLUyA

We all saw you walk out of that meeting and have a rage filled meltdown in front of the cameras. You sounded like you had rabies. Put down your twitter and go get some psychological help. https://t.co/RT2b9WPExX

Last but not least, Schumer rather disagrees with how Trump says things went.

I would describe his demeanor as agitated. https://t.co/3ZTsA9u6mz