Trump On Fox: If Charlie Rangel Can Say ‘Cracker,’ Then Paula Deen Should Be Able To Say The ‘N-Word’ 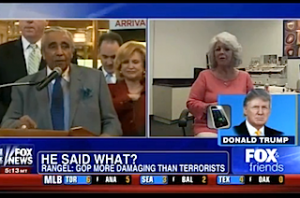 Donald Trump compared Rep. Charlie Rangel (D-NY) to Paula Deen this morning. Rangel’s recent rant against tea party “crackers” was just one of the topics Trump tackled Monday morning on Fox & Friends, lamenting the fact that Rangel has mostly gotten away with his statements while Deen was “crucified” for hers.

Trump said he was “surprised” that a “nice guy” like Rangel would make comments like the ones he did in the first place, and noted, “If Charlie or whoever it was was a Republican and they made that statement, they’d be resigning from office right now.”

Host Steve Doocy was the first to push the “double standard” narrative about Rangel and Deen, but Trump was quick to agree. “Nothing will happen to Charlie,” Trump said. “I see it all the time. If you’re a Republican and you make a statement like that, it’s over. I mean, you are finished… It’s a very rough double standard.”

“Paul Deen was absolutely crucified, what they did with her,” Trump added. “I don’t know what even happened to her. I see everybody dropped her. She has really got some problems. It’s amazing.” When Tucker Carlson jumped in, demanding President Obama “take a stand” against Rangel, Trump said that was unlikely. “Obama is going to take a pass,” he said. “They’re all going to take a pass. And that’s the way the country is right now.”

The question of whether the “n-word” and “cracker” carry the same offensive weight has been a hot topic of conversation following the George Zimmerman trial in which it was revealed that Trayvon Martin used both words to describe the defendant. A CNN panel led by Don Lemon ultimately concluded that the word the network could not spell out on screen was probably worse.