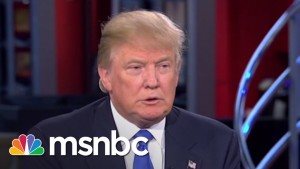 Oh, man, what’s a news network torn by conflicting narratives and cheap, easy ratings to do? Even as MSNBC holds on to the last shred of its claim to be a Forward-Leaning liberal news network, they’ve been feeding at the Donald Trump trough like a Berkshire pig with a tapeworm. As dependent as they are on those Trump-generated bucks, though, they still need to join the rest of the media in trying to knock Trump down so they can preserve the delusion that nah, Republicans aren’t really like this.

This desperate search for any chink in Trump’s armor led MSNBC’s Steve Kornacki to pitch one of the more ridiculous theories I’ve heard about how Trump might maybe be about to collapse:

What strikes me about Trump supporters is he has more core support than anybody else. He has more people say “I have decided Donald Trump is my candidate and I’m not considering anybody else.” It’s far away bigger than anybody else. The flip side is he has less second choice support. If you ask people, if Trump is not your guy, who are you going to be with, Ted Cruz gets a lot of support, when you ask a Rubio and Cruz supporter, Trump doesn’t come up nearly as much.

Kornacki is absolutely right, of course, but it’s because Trump is kicking everybody’s ass by so much. That’s how that works: if you’re most people’s first choice, then you can’t also be their second choice.

Even notwithstanding that mathematical reality, in the latest Fox News poll, Cruz leads with 19% second choice support, followed by Rubio at 16% and Trump at 14%. But he’s beating Cruz by 15 points and Rubio by 22 points! If you add first and second choice support together, Trump still beats Cruz by ten points and Cruz by twenty. If you really want to read into this poll, what it really says is that Trump is potentially one drop-out away from getting 49% of the vote. This is tipping-point stuff.

If MSNBC really wants to dent Donald Trump, they should start by canceling the de facto show he now stars in at the network, not torture math like it’s some detainee at Trump’s Future Gitmo.