Trump Pressed On Fox About Obama’s Tax Rate, Refuses To Criticize: ‘We Only Want To Attack Fairly’
video

Trump Pressed On Fox About Obama’s Tax Rate, Refuses To Criticize: ‘We Only Want To Attack Fairly’ 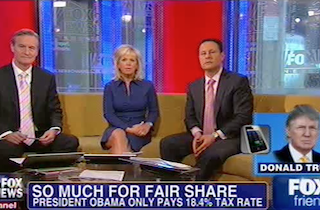 “So much for fair share,” read Fox & Friends‘ chyron on Monday, as the co-hosts invited Donald Trump to discuss President Obama‘s 18.4-percent tax rate. While Gretchen Carlson posited that it’s perhaps a lower rate than some may have expected, and Steve Doocy spotted a contradiction, Trump refused to fuss over it. Because he only attacks “fairly.”

“Many people are going to ask whether or not that’s his fair share,” Carlson said, especially given the hoopla during the election cycle surrounding Mitt Romney‘s tax rate. Obama isn’t “paying the amount that you might think.”

“I don’t make much of it,” Trump replied plainly. “It would be nice if everybody could be down at that level.”

“Certainly I wouldn’t want to make a big deal out of it,” he added. “He did make some donations, and, you know, we attack, but we only want to attack fairly.” (Said the man who called for a “revolution” after the election, and made the president a “very serious” $5 million wager.)

Trump remained unprovoked. “If that goes through, he won’t be able to do it next year — so that’ll be interesting, and then he’ll have to pay higher taxes,” he replied. “But everybody is paying higher taxes, and it’s not good because the economy is very fragile and taxes are going up.”