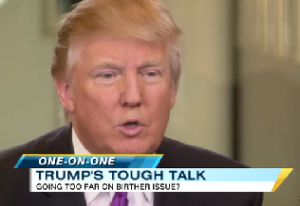 The day that some thought would never arrive and many others could care less about is finally here. President Obama released his long-form birth certificate. However, since Donald Trump truly thought this day would never come, now that it has, one of his “promises” may soon start to haunt him.

In an interview last week with George Stephanopoulos, Trump proudly declared his great financial worth and laughed that he would release all such private details on that same, likely-to-never-occur date, when Obama released his birth certificate. The full exchange:

Trump: I have a great company. I’ve done a great job, which if I run, you’ll see what a great job because I’ll do a full disclosure of finances and I will tell you . . .
Stephanopoulos: Including your tax returns?
Trump: We’ll look at that – maybe I’m going to do the tax returns when Obama does his birth certificate.

Ok fine, it seems like there might be a few trapdoors for Trump to escape through. He did say the word “maybe,” which certainly means “maybe I will” or “maybe I won’t.” And also, not in the context of this precise dialogue, but Trump has suggested elsewhere that he will release his financial information on the first day he officially declares he is running for President. Given that such a date has yet to happen, Trump shouldn’t necessarily be expected to release anything immediately, since Obama’s sudden release did catch everyone by surprise.

However, if Trump does in fact decide to run for President then unless he releases all such tax forms, his bravado and this statement in particular will hang like an albatross around his neck. And if Trump then fails to be transparent and make the appropriate disclosures, political opponents will be entirely in the right to claim that he is the one hiding something.