Trump Promises to Never Let Megyn Kelly Forget: ‘She Should Apologize to Me’
Video

Trump Promises to Never Let Megyn Kelly Forget: ‘She Should Apologize to Me’ 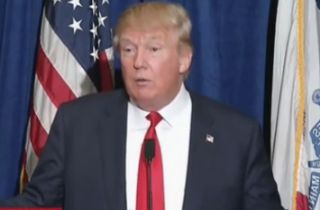 After kicking Jorge Ramos out of his press conference in Iowa, Donald Trump was asked to comment on his Twitter tirade against Megyn Kelly last night, including a retweet labeling her a bimbo. He made it clear in no uncertain terms that “she should apologize to me, but I just do not care.”

Trump is still upset that Kelly asked him tough questions at the Fox News debate, but this time he appears to have gone too far for them. Various Fox Newsers told him to knock it off, including Roger Ailes, who demanded an apology. Trump, being Trump, still kept attacking Kelly.

Later, Trump was asked about his seemingly renewed war between himself and Fox News, where he bemoaned how, despite his constant reminders about his poll numbers, “Fox treats me terribly, and a lot of the people that like me think they treat me terribly.” He once again brought up Kelly supposedly “unfair” questions at the GOP debate, saying that the other candidates were asked far easier questions than she asked him.

When asked another question about Kelly, he said that “when people treat me unfairly, I never let them forget.” He suggested that doing so more often in the future would stop the country from “getting pushed around so much.”

It’s worth noting here that hours beforehand, on Howard Stern‘s show, Trump was saying that he and Fox are “fine” and that Roger Ailes is an “amazing guy.”

You can watch both clips here, via CNN: