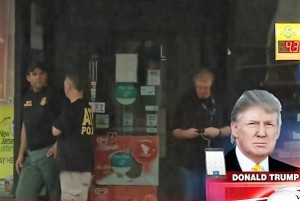 Republican presidential nominee Donald Trump said yet another thing that would be a big deal coming from any other presidential candidate, but which will undoubtedly blend into the gold-filigree-inlaid woodwork of everything else Trump says. During a lengthy interview with Fox and Friends, Trump accused the New York City Police Department of knowing who the terrorists are before they attack, but allowing the attacks to happen anyway. And he somehow meant this as a compliment.

Co-host Brian Kilmeade pressed Trump to get specific about what he means by “getting tough” on terrorism, and Trump responded by explaining that the local police are “amazing,” but also too afraid to arrest terrorists before they attack:

What Trump is trying to do is illustrate what he and his supporters see as the supposed ill effects of so-called “political correctness,” but what he’s actually saying is that NYPD officers are cowards with blood on their hands. If they did, in fact, “know who a lot of these people are,” that would mean they’d have, at the very least, reasonable suspicion, which is a pretty easy legal standard to meet. Even if that were not the case, the risk of being accused of profiling seems insignificant compared to the loss of life and limb that a terrorist attack entails. People who think so poorly of the police surely exist, but they don’t say it out loud if they’re running for president.

Trump has also long claimed, falsely, that neighbors of the San Bernardino shooters “saw pipe bombs” in their garage but were afraid to tell police. In fact, Trump told a rally crowd that he personally watched a neighbor say this:

They didn’t want to report them because they thought it was profiling. Okay. They saw bombs. They saw pipe bombs. When a bomb is this long, got to put too many of them together for a bathroom, right?

That would be frightening if it were true, but in reality, there was one guy who says a neighbor told him the killers worked in their garage late at night, but didn’t report it because (he says) she didn’t want to profile them. But Trump says he watched someone claim they saw pipe bombs, and did nothing.