Trump Surrogate on CNN: ‘Russia Did Not Seize Crimea’
VIDEO

Trump Surrogate on CNN: ‘Russia Did Not Seize Crimea’ 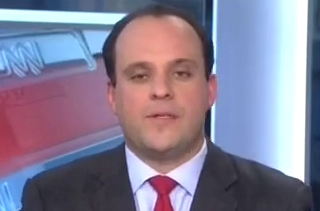 “Again, Russia did not seize Crimea,” GOP consultant Boris Epshteyn argued. “We could talk about the conflict that happened between the Ukraine and Crimea, it’s an ongoing conflict, but there was no seizure by Russia. That is an incorrect statement, characterization of what happened.”

Here’s the video of an official Trump campaign surrogate saying, “Russia did not seize Crimea.” https://t.co/MDNXfVYvMb (Starts around 4:30)

The New Yorker‘s Ryan Lizza immediately jumped on that comment, but was cut off by host Poppy Harlow so every guest could speak before the segment ended. Undeterred, he took up the challenge on Twitter.

Exact quote from Trump campaign surrogate on CNN a few minute ago: “Russia did not seize Crimea.” Literally Putin’s propaganda.

Trump surrogate @BorisEP, according to his Politico bio, emigrated to US from Moscow. So I don’t think he can claim ignorance of the region.

Epshteyn defended himself on Twitter as Lizza hit back.

.@RyanLizza definitely not ignorant on the region, thanks. It’s a very complicated situation as @realDonaldTrump said today. US has not led.

It’s not THAT complicated. You said, “Russia did not seize Crimea.” Nobody but Putin believes that. https://t.co/FcYfN3VpaJ