Trump Talks Maher Feud: If You Insulted Obama Like He Insulted Me, You’d Be ‘Fired Immediately’ 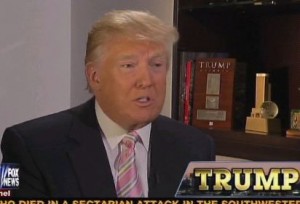 Donald Trump sat down with Sean Hannity tonight in a wide-ranging interview that hit on everything from the fiscal cliff to the recent controversy over Miss Alabama. Hannity asked Trump about his ongoing feud with comedian Bill Maher, whom offered five million dollars for Trump’s birth certificate to prove that Trump wasn’t birthed from an orangutan. Trump decried the double standard that allowed Maher to get away with his remarks mostly unscathed, saying that anyone who made similar remarks about President Obama would be “fired immediately.”

RELATED: Donald Trump: I Will Sue Bill Maher If He Does Not Pay Up $5M

Hannity said there would be far more outrage if anyone but Trump had been the target of Maher’s barbs. Trump called Maher “insulting” and said he was shocked by the “horrible things” Maher was saying about his parents. He sent a letter directly to Maher with his birth certificate demanding the five million dollars, which he joked that Maher may or may not have. There has been some question over whether Maher would be legally obligated to pay up, but Trump assured Hannity that his lawyer is confident of their case.

But on the subject of the double standard, Trump agreed that there is only minimal outrage because the insults were directed at him. He told Hannity that if he ever said anything similar about Obama, “you would be fired immediately.” He said that more people should be outraged about Maher’s statements, bragging that his lawyer won him five million dollars before and he’ll do it again.