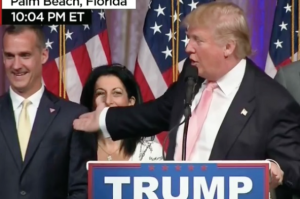 Donald Trump gave a speech of thanks Friday to everyone who put the Republican National Convention together, and he even included a shoutout to a man he fired for continuing to be one of his most resolute advocates.

After ripping into Ted Cruz, Trump started to shout out members of his personal campaign staff for helping him reach his current position in spite of skepticisms over its size and organizational skills. Dan Scavino, Hope Hicks, and Paul Manafort were among those Trump identified, and he eventually threw a bone to his old campaign manager, Corey Lewandowski

“Corey Lewandowski was great. I have to tell you, and he’s been very loyal and he’s been on CNN and he’s really been fighting for me, which is very nice and I respect that a lot.”

Lewandowski was axed by Trump approximately one month ago, and was hired by CNN almost immediately afterwards to give insight into the machinations of his former boss. CNN’s decision was subject to great controversy due to Lewandowski’s NDA contract, his hostility to reporters, and because he has been receiving severance payment after the firing.

It would seem that Trump does continue to watch CNN, despite routinely pounding them for doing negative coverage of him. CNN’s John King also showed that Trump and Lewandowski are still in contact with one another when he posted this picture from the network’s panel last night.