Trump: ‘The Indians Have Gone Wild’ Over Hillary’s ‘Off the Reservation’ Remark 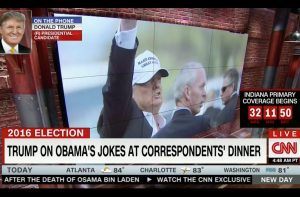 Republican presidential candidate Donald Trump argued on CNN Monday that Hillary Clinton‘s statement that he had gone “off the reservation” was insulting to Native Americans, while ironically using some slightly offensive language himself.

“She has taken from others a lot of heat having to do with that statement,” Trump said, “I think it’s a very harsh statement. It’s basically, you know, like, ‘I can handle men. Don’t worry about me. I can handle men.’ If somebody said that, if I made that statement about women, there’d be front page headlines.”

“You just did,” pointed out CNN’s Chris Cuomo.

“I’m not bringing that up. I’m saying that it has been, big league,” insisted Trump.

(1/2) About the use of an expression today that has some very offensive roots…Divisive language has no place in our politics.

(2/2) @HillaryClinton meant no disrespect to Native Americans. She wants this election to be about lifting people up, not tearing them down.