Trump Will Finally Appear on Fox News Sunday Next Weekend 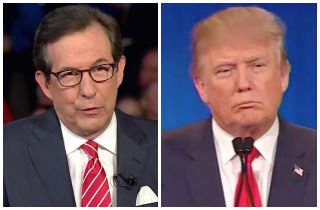 You may have noticed that over the past few months, Donald Trump has made a lot of Sunday show appearances. He’s done CNN’s State of the Union, CBS’ Face the Nation, NBC’s Meet the Press, and ABC’s This Week.

Notice anything missing there? Like, say, the Sunday show hosted by one of the moderators at the debate Trump was really angry about?

That’s right, ever since announcing his 2016 candidacy, Trump has not once appeared on Fox News Sunday. And while part of that may have been due to how upset Trump was at the line of questioning he got from Chris Wallace at the debate, there’s actually another reason.

See, you may have noticed that Trump likes calling in to a lot of shows instead of sitting down for interviews. The other Sunday shows haven’t had a problem with it, but Wallace drew a line in the sand back in August:

But then a few days ago, Trump tweeted this out:

With the fantastic ratings last weekend, @meetthepress & @ThisWeekABC, I think it’s only fair that I go on @FoxNewsSunday w/ Chris Wallace.

And now Fox News has announced that Trump will sit down with Wallace for an interview on next Sunday’s Fox News Sunday.

Wallace is the second Fox debate moderator that Trump will sit down with following that debate, having done an interview with Bret Baier last week. As for a potential Megyn Kelly sit-down in the future… don’t count on it.