Trump Will Sit Down for Real-Life, In-Person ‘Exclusive’ Interview with Chuck Todd
VIDEO

Trump Will Sit Down for Real-Life, In-Person ‘Exclusive’ Interview with Chuck Todd 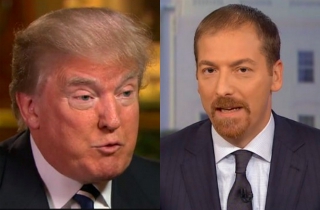 As Seth Meyers noticed recently, Donald Trump is the king of the phone interview, rarely gracing a television host with his actual presence. But this coming Sunday in Iowa, the GOP presidential frontrunner is scheduled to sit down for a real-life, in-person interview with Chuck Todd on Meet the Press.

In a press release on Wednesday, an NBC News spokesperson touted the “exclusive” interview, which is being described as a “wide-ranging conversation about the presidential field, the economy, immigration and foreign policy.”

Trump has somewhat of a contentious history with Todd, lashing out at him on Twitter earlier this year after the host remarked, “Nobody’s going to mistake Donald Trump for a presidential candidate, I don’t think, other than Donald Trump.”

He tweeted the following rant, culminating in the suggestion that he would make a better moderator of the Sunday morning talk show:

Word is that @NBCNews is firing sleepy eyes Chuck Todd in that his ratings on Meet the Press are setting record lows. He's a real loser!

"@tarheels31: @realDonaldTrump @NBCNews outside of the apprentice, hardly anyone watches the obama network… aka @nbc"

"@bgoudyGCC: @realDonaldTrump @NBCNews Can't wait to see #SleepyEyes on the next #CelebrityApprentice. Oh wait, he would have to be a celeb

I am convinced that sleepy eyes Chuck Todd was only a placeholder for someone else at Meet the Press. He bombed, franchise in ruins! @nbc

So many people have told me that I should host Meet the Press and replace the moron who is on now. Just too busy, especially next 10 years!

Unlike the rest of the Sunday morning shows, Fox News Sunday with Chris Wallace has reportedly made a rule against interviewing presidential candidates by phone. While Trump regularly calls into Fox & Friends, he has done two of his rare on-camera interviews on The O’Reilly Factor back in June and on Hannity last night.

Watch Trump’s most recent phone interview with Todd below, via NBC: