Trump’s Excuse for Not Condemning KKK on CNN: I Had a ‘Lousy Earpiece’
VIDEO

Trump’s Excuse for Not Condemning KKK on CNN: I Had a ‘Lousy Earpiece’ 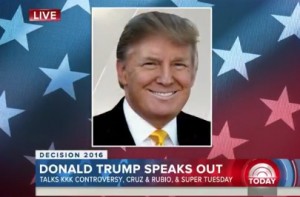 When asked about his refusal on CNN Sunday to condemn the Ku Klux Klan and David Duke, presidential candidate Donald Trump told NBC’s Today that he was confused because of “a very bad earpiece.”

“The question was asked about David Duke and various groups, and I don’t know who the groups are,” Trump said. “I said would you do me a favor and tell me the groups? He was unable to tell me that.”

“So let me tell you, I’m sitting in a house in Florida with a very bad earpiece that they gave me and you could hardly hear what he was saying but what I heard was ‘various groups,’” Trump said.

Trump pointed out that he disavowed Duke the day before, and that CNN was present at the press conference. “Now I go and I sit down again, I have a lousy ear piece that is provided by them and, frankly, he talked about groups. He also talked about groups and I have no problem with disavowing groups, but I’d at least like to know who they are.”