Trump’s Solution to North Korea is for South Korea to Pay Us. Which They Already Do
video

Trump’s Solution to North Korea is for South Korea to Pay Us. Which They Already Do 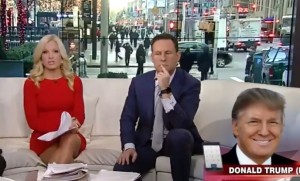 While the White House is looking askance at claims that North Korea has tested a hydrogen bomb, Republican presidential frontrunner Donald Trump already knows how he would handle this crisis. In addition to magically getting China to metaphorically come get their boy, Trump told the Fox and friends gang Wednesday morning that he would force South Korea to “pony up,” because nothing strengthens alliances like a little extortion:

I would immediately start talking to China. And by the way, I’d get South Korea, that’s making a fortune. You know they’re our trading partner, if you want to use the word partner, and I have many good friends in South Korea. They can’t believe what they get away with. I would have them start, you know we have 28,000 soldiers sitting up at the line, and between North Korea right now between North Korea and south Korea. I wouldn’t want to be necessarily sitting there, could be a hot zone. But we get almost nothing for what we do. We defend the world. We defend so many countries. We get nothing. They get everything, we get nothing. South Korea’s going to have to start ponying up, okay, and we’ll do it in a very nice manner. They’ll like us more than they like us now, but they probably don’t like us very much. Most countries don’t like us very much, even though they take advantage of us. They’ll be happy and they’ll have to pay something because we cannot continue to police the world, and get nothing for it.

There’s actually way more than just one problem with Trump’s plan, but the one voters should be most concerned about is that South Korea is already “ponying up” to the tune of $867 million in 2014. That’s a significant increase since the last time Trump made this claim, in 2011. Back then, South Korea was contributing $694 million. I suspect from the look on his face that even Brian Kilmeade smelled a rat, since he immediately pivoted back to China and ignored the South Korea claim.

It’s obviously not a requirement for Republican voters that their candidates know stuff, but it would be nice if one o the many journalists who whore themselves to grab some of Trump’s luster for themselves would ask him about this, instead of being the fourth person to ask him if Ted Cruz is eligible to run for president.