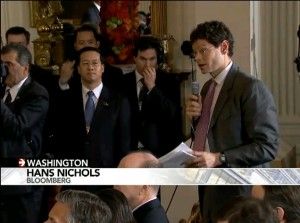 At today’s press conference, Bloomberg TV White House correspondent Hans Nichols persistently pressed China’s Hu Jintao to answer his question concerning human rights in his country. Hu said that, initially, he did not hear questions about human rights “because of the technical translation and interpretation problem,” but, now that he’d heard the question, he was “certainly in a position to answer it.” Encouraging!

Hu then described how he and President Barack Obama had met eight times to discuss issues of “shared interest” candidly, human rights being among those issues. He continued, saying, as his translator put it:

As President Obama rightly put it just now, though there are disagreements between China and United States on the issue of human rights, China is willing to engage in dialogue and exchanges with the United States on the basis of mutual respect and the principle of non-interference in each other’s internal affairs. In this way, we will be able to further increase our mutual understanding, reduce our disagreements, and expand our common ground.”