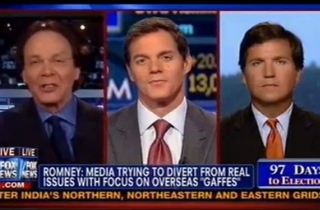 “Did the media overplay this gaffe attack on Governor Romney?” host Bill Hemmer asked Carlson after showing the now-infamous clip in which a Romney aide tells reporters to “kiss my ass” as they shout questions at Romney during his Poland trip.

“I thought you weren’t supposed to shout questions at politicians,” quipped Carlson, referring to the backlash against his employee Neil Munro‘s shouting questions during a President Obama presser. “I guess the standards have changed in the last couple weeks. Yeah, they overplayed it. Of course they did. The press doesn’t like Mitt Romney. They’re for Obama, obviously, we know that. There’s no use whining about it.”

“You always blame the media when you don’t get what you want,” Colmes shot back, and then attempted to explain why he felt Romney’s remark that Israel is economically superior to Palestine for cultural reasons was an offensive gaffe. “If he’s going to be a leader on the world stage and possibly have to deal with mideast peace, you can’t be making those kinds of statements.”

“He got it right the first time,” Tucker responded in defense of Romney. “Culture effects outcomes, Alan, there’s no arguing with that. Israeli culture is more conducive to success than Palestinian.” The two then squabbled over whether such a comparison is fair, seeing as though Palestine isn’t actually a country.

The debate then turned to Senator Harry Reid’s recent allegations that an unnamed source told him that, at one point, Romney did not pay taxes for ten years. “Why is the Senate Majority Leader making such accusations?” Hemmer asked the guests.

“Because he’s a relentless partisan who has almost no ability to control what he says,” Carlson responded. “I’m not taking a moral stand on whether or not he ought to release his tax returns, but the political fact is as long as we don’t know what’s in them, people can come up with all kinds of theories.”

However, Carlson’s liberal opponent Colmes refused to support Sen. Reid’s allegations. “I’m not going to defend what Harry Reid said because it was unsourced, and it’s hearsay,” he said, adding that “Mitt Romney could have solved this a long time ago. Did he think he could run for president without releasing tax returns?”