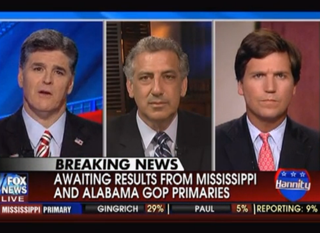 On the cusp of finding out which Republican candidates will be going home with the biggest chunk of Alabama and Mississippi’s delegates, a PPP poll showing a plurality of Republicans from the state believing President Obama is a Muslim led the headlines, and on tonight’s Hannity, host and panel delved into what they considered a classist bias from the media against the South, adding to that poll the very unflattering footage of Mississippi Bill Maher aired on Friday night. While most of the panel found the poll dubious, Tucker Carlson also challenged the assumption that thinking President Obama is Muslim is a negative assessment of him, asking why liberals find the claim offensive: “are liberals anti-Muslim?”

Sean Hannity noted that he found the methodology of the poll questionable– and that some, like NBC’s Chuck Todd, also questioned the robo-survey logistics of it. He tied this to a bigger narrative, however, particularly with the work Bill Maher did over the weekend with his Mississippi report.

Carlson argued that both were part of a “a long-standing point liberals have made… that there must be some kind of hidden bias to opposition to Obama.” While he noted that, given how red the two states are, “it doesn’t matter” what they think of President Obama, he considered the greater attempts on the left to be catering to “the dumb biases” of “Volvo-driving” liberals.

Joe Trippi, as a Democratic strategist, had a take more akin to Chuck Todd’s than Carlson’s, admitting that “I don’t like the methodology of the robo thing,” among the many reasons because he thinks “people who want to needle the President will use the Muslim word” despite the fact that they might not believe it. What Trippi contested was the idea that PPP somehow helped the President with these numbers.

To add to the larger media as Democratic surrogate narrative, Hannity brought up the film Game Change, which he thought added to the image of Republicans as somehow irrational. Carlson agreed. “It puts [President Obama] in the position of the persecuted, decent guy” who is hated by racists because of his race he argued, while policy disagreement is “entirely valid.” As for the poll, Carlson added that he found it bizarre that the left found it outrageous. “Why is it bad to be a Muslim– are liberals anti-Muslim?” Trippi defended Game Change‘s credentials from former McCain/Palin staffers as something other than a “liberal conspiracy,” but he didn’t get Hannity to agree in the end.