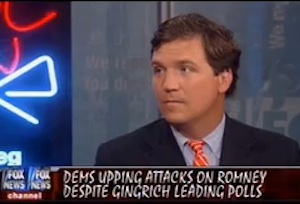 Greg Gutfeld earlier surmised that the Democrats were setting up Republicans in being sympathetic towards Gingrich so that they nominated Romney instead, who would ultimately be more beatable. Carlson disagreed with Gutfeld’s assertion.

Comedian Sherrod Small thought Gingrich had a lot of great qualities as a candidate. “I like Newt. He spices things up a little bit. He is a smart dude…He is not a flip-flopper. Nobody can call him that. So I think it is good Romney and him go against each other.”

“Newt has been able to brand himself as a tea party candidate,” added Newsmax columnist Jedediah Bila, and remarked how unusual it was that the “most established candidate” became the “outsider candidate.” “The year of the tea party and everybody wants a fresh face, maybe a governor we didn’t know about. No, it is Newt Gingrich who has been there as long as anyone!”