Tucker Carlson Faces Off with NYT’s Kristof: Where’s Your ‘Empathy’ for Trump Voters? 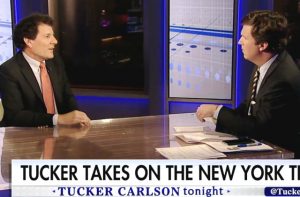 Fox News’ Tucker Carlson squared off with New York Times columnist Nicholas Kristof over whether he and others in the media have not sufficiently shown empathy to non-racist Donald Trump voters.

Carlson told Kristof that he doesn’t really see any of that in his latest column, “A 12-Step Program for Responding to President-Elect Trump.” Multiple times throughout the interview, Kristof objected to Carlson’s characterization of his words, and his column does say this:

But Carlson argued that he does not delve deep enough into the reasons why Trump won and already crossed that bridge of attacking Trump supporters in a past column about how fanatics and racists and Neo-Nazis support him.

He told Kristof he’s implying that his fellow Americans are “racists or bad people.” Kristof insisted the opposite and told Carlson, “I’ve been taking abuse on that from my fellow liberals.”

He made it clear to Carlson that he doesn’t think all Trump supporters are bigots and he understands that a lot of them have serious economic issues they didn’t feel Washington was adequately responding to.