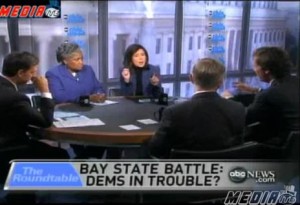 On today’s “This Week” roundtable, The Nation editor Katrina Vanden Heuvel invoked the term “tea-bagger,” prompting a disgusted protest from Daily Caller’s Tucker Carlson. Vanden Heuvel’s response was to plow through Carlson’s objections, a strategy which, no doubt, delighted liberals and infuriated conservatives. The term “tea-bagger” has become a gargantuan red herring, almost a “red spermwhale,” if you will.

Carlson revisits the term later in the show, but here’s the exchange with Vanden Heuvel:

In terms of pure, practical politics, I’m going to have to side with Carlson here. Despite the self-inflicted nature of the “tea-bagger” wound, and the fun everyone has had using it (and inventing it), the joke is now on the collective, non-tea-bagging us.

Let me preface this by saying that I do not believe, for a second, that these folks were ignorant of the one and only definition of “tea-bagging” prior to MSNBC’s turnabout. I believe that they were happy to espouse the image of their movement forcing their metaphoric tea-bags into the mouths of the Democrats, and only cried about it when the filthy imagery boomeranged on them. I give them credit for more intelligence than Rachel Maddow does.

As such, I wouldn’t quarrel with liberals who think that the Tea Party movement “deserves” this treatment, although I’d hope they would use discretion around the children who are often present at these protests.

However, even if you grant the entire liberal narrative on “tea-bagging,” that they’re idiotic stooges being exploited by the same people who put them in the fix that has them so angry, the liberal response to them has been, and continues to be, deadly to their own political fortunes. Vanden Heuvel’s response is emblematic of this smug, dismissive, and mocking attitude.

Liberals, and many in the media, have been pointing out how stupid the Tea Party movement is for almost a year now, myself included. It’s media coming-out was in a rant by CNBC’s Rick Santelli in which he derided “loser” homeowners on a Chicago trading floor while being cheered on by douchebag traders. There is no logical reason why this should have caught on, at least to the extent that it did in the  media.

Simply pointing that out, however, is obviously not enough. They’re still here, and they’re helping to widen the enthusiasm gap going into the 2010 elections. Performances like Katrina’s might make the Kos crowd stand up and cheer, but it isn’t going to get soft Dems out to the polls this Tuesday, or in November. For conservatives like Carlson, “tea-bagger” is here to stay. It’s practically in the dictionary, and only with the “clean” definition. This kind of protest will make Tucker a hero to the right, and fuel enthusiasm for opposition to the President.

The lesson here is that it’s not enough to be clever, or right, or better. “Firefly” got canceled halfway through its 1st season, and “According to Jim” stayed on the air for nine years.

The Democrats need their own version of the “tea-baggers,” an energized group to push back against the opposition that has formed around things like Sarah Palin‘s “death panels.” If they have to endure being called “salad-tossers” or “pearl-necklace-wearers” for their trouble, so be it. It’s a fair trade.