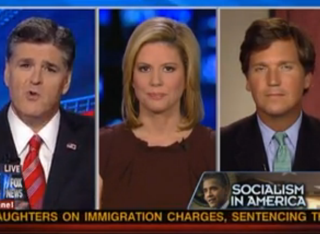 Sean Hannity dedicated a segment today to his concern that comments Bill Ayers recently made are reflected in President Obama’s health care plan, and the President’s relationship with capitalism. While Tucker Carlson, who has met and dined with Ayers, shared Hannity’s suspicion that the President is “deeply suspicious of capitalism” and unprepared for the job, Kirsten Powers argued that he had done more for health care and the economy than any Republican.

RELATED: Frank Rich: ‘If You Put A Reloaded Gun’ Up To Palin Would She Know About Bill Ayers?

Playing several clips of the President speaking on the economy and health care, Hannity accused President Obama’s statements of being “not true” and putting Republicans in a bad life. Carlson explained them as a natural response to his upbringing, “spending most of his life cloistered away in elite institutions” and bring “deeply suspicious of capitalism– and I don’t think he has pretended otherwise.” Powers countered that she did believe the President made a “valid point” on the health care front, since she did not see Republicans “do anything about health care” when the President offered a solution, using as an example the fact that Republicans voted against mercury standards in water. Hannity argued it wad absurd for this to say “Republicans want dirty air and water, and kids with autism and down syndrome.”

Carlson objected to the rhetoric, however, adding to Hannity’s argument the idea that, first, “no relation between mercury vaccines and autism exists,” and that “my opponents want old people to die” is a ridiculous argument: “Is there an American who believes that? Talk to me like an adult!” Hannity replied the President spoke like that “because he can’t run on his record,” which Powers also objected to. “The economy is basically moving in the right direction,” she asserted over Hannity’s protests, “it’s turning around, sorry.” They did not end up agreeing on that front.