Tucker Carlson: “I Think Personally [Michael Vick] Should Have Been Executed” 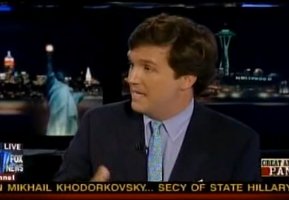 Tucker Carlson again filled in for Sean Hannity on Hannity tonight, and couldn’t resist, as others already had, delving into the issue of President Obama praising Philadelphia Eagles owner Jeffrey Lurie for giving quarterback Michael Vick a second chance following Vick’s prison sentence for dog fighting. And while Carlson said he “believe[s] fervently in second chances,” he didn’t in Vick’s case. At all.

Carlson differentiated between Vick and others because Vick “killed dogs…in a heartless and cruel way.” This is true. But what Carlson believed to be the proper punishment for Vick is sure to get some attention:

“I think, personally, he should have been executed for that.”

Whoa. The conversation eventually turned to whether it was appropriate for Obama to weigh in on this matter at all (although, as the White House said, the primary focus of Obama’s discussion with Lurie was alternative energy) – golfer Ben Crenshaw, on the panel for some reason, came off as a Vick supporter but sounded unsure of whether the president should be discussing the matter. Republican strategist Leslie Sanchez voiced similar views, whereas Fox News contributor Doug Schoen didn’t see an issue with Obama’s comments.

The most notable aspect of the discussion, though, was still Carlson’s “executed” line, for the sheer extreme nature of it. There’s no question Vick has done terrible things, but to hear a pundit openly opine that a prominent person should have received the death penalty – and being completely sincere in doing it – is not something you’ll see too often. Video of the clip, via Fox News, below.