Tucker Carlson Slams Obama Blackness Riff: What If Romney Said ‘Be Confident in Your Whiteness’? 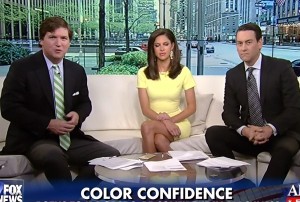 On Saturday, President Obama delivered the commencement address at Howard University, one of the oldest and most prestigious Historically Black Colleges and Universities (HBCU) in the country. Unfortunately, part of the President’s speech has perplexed, disturbed, and actually “depressed” Fox and Friends Sunday host Tucker Carlson.

The most obvious answer is, of course, that Mitt Romney never would have said that, because the whole point of whiteness is that you don’t ever have to think about it, any more than a bird has to think about being able to fly.

But the real answer to Carlson’s “confusion” rests in the dodgy “Color Confidence” chyron that runs on the screen during the segment, because of course, the “blackness” to which the President refers is much more than a “color,” unlike whiteness. White really is just a color, there is no common white heritage or white culture or white experience, but there is a common black experience and heritage that was forced on them by a majority that didn’t have to do anything other than to be white.

What’s truly depressing is that Tucker Carlson is actually a very intelligent and insightful person in real life, and he’s just exploiting white ignorance for profit. Since he asked, though, President Obama did actually get “specific” about blackness in that speech, and even had a message for Tucker’s viewers, too:

But we must expand our moral imaginations to understand and empathize with all people who are struggling, not just black folks who are struggling — the refugee, the immigrant, the rural poor, the transgender person, and yes, the middle-aged white guy who you may think has all the advantages, but over the last several decades has seen his world upended by economic and cultural and technological change, and feels powerless to stop it. You got to get in his head, too.

When you do, say hi to Tucker Carlson. He’s already there.