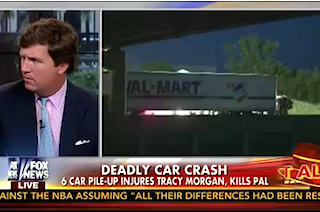 “I’m not defending anyone here,” Tucker Carlson made sure to say on Fox & Friends Sunday this week. But it sure did sound like that when he argued that the Walmart truck driver who allegedly fell asleep and rammed into a limo bus carrying comedian Tracy Morgan and others should not be charged with a crime.

The New Jersey Turnpike crash happened at approximately 1 a.m. on Saturday and included six vehicles, leaving comic James McNair dead and Morgan in critical condition. The Fox News show had attorney David Schwartz on Sunday to share some insight on what could happen to the driver if he is found guilty of death by auto, which necessitates “recklessness.”

“If he did fall asleep at the wheel, that’s one of the ways that you could commit reckless driving in New Jersey,” Schwartz told the hosts. “And certainly the fact that a death occurred, 5 to 10 years in jail.”

“For falling asleep and causing a death?” Schwartz replied. “Absolutely.”

“But, I mean sometimes people — and I’m not defending anyone here,” Carlson continued. “I’m really struck by the idea that someone who falls asleep, which is something that everybody does every day, not necessarily considered an act of recklessness, does it unintentionally, nods off, is a criminal.”

“They always survive by the way, the people who cause accidents,” Carlson concluded at the end of the segment, before reiterating that this event was a terrible “tragedy.”