Tucker Carlson: The Tea Party Has Destroyed The Republican Establishment 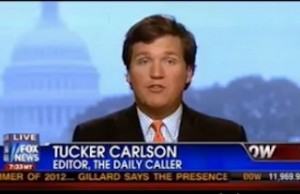 After openly questioning why Romney hasn’t made more of an effort in including an energized side of potential GOP voters sympathetic with the Tea Party movement, Carlson boldly stated what he felt to be an under-told story in the evolution of conservative politics, saying of the Tea Party:

Well I think the explanation is a little broader. Leaderless movements don’t endure because they can’t. This is basically a leaderless movement. But I think it’s had a huge effect, and its biggest effect that almost no one ever mentions is that the Tea Party destroyed the Republican establishment. All the people Republicans and conservatives have looked to for guidance have been basically discredited by the Tea Party, which has alllowed this current chaos to flower. That may be a good thing, it might be a bad thing. I don’t even know. But that is the legacy of the Tea Party. No more Washington establishment on the right.

One of the leitmotifs of the 2010 midterm election was what we called the GOP Civil War, and was perhaps best evidenced by the ongoing rhetorical battle between GOP operative Karl Rove and Tea Party Senatorial candidate Christine O’Donnell. Carlson makes the astute point that business as usual inside the D.C. beltway is a thing of the past, which is evidence of a Tea Party victory in the battle for the soul of the conservative movement.

Given that Carlson has a lengthy resume of defending the GOP and conservative movement, it’s not difficult to imagine that when he says that he isn’t sure if this is a “good thing or bad thing,” he really is shooting a cannonball across the bow of the USS Tea Party, especially when Tea Party endorsed candidates like Herman Cain (and Sharron Angle of last fall) brought embarrassment to some in the GOP ranks. Perhaps the Tea Party has won the GOP battle, but some might suggest that they will lose the eventual war against their Democratic foes.