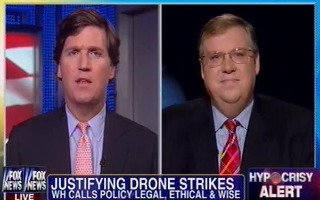 While guest hosting Fox & Friends Weekend on Saturday, co-founder of The Daily Caller, Tucker Carlson, criticized the American Civil Liberties Union for being uncritical of President Barack Obama’s conduct of the war against terror overseas. His criticism of the ACLU, however, was not based in evidence as the group has been vocally and consistently critical of the White House. The ACLU has even taken legal action against the Obama administration in an effort to halt the continued use of tactics which they believe amount to the abuse of executive power.

“Here, the president unveils this policy – or it was revealed actually by a reporter. He hasn’t closed GITMO. The ACLU has said nothing. Next time we have a Republican president and they stand up and cry fascism, do you think anybody will listen?” Carlson asked former Justice Department official J. Christian Adams.

It is unclear whether Carlson is admonishing the ACLU for saying “nothing” about Obama’s drone warfare program or his administration’s failure to close Guantanamo Bay. In either case, Carlson is incorrect.

The ACLU has been actively marshaling concern about the Obama administration’s drone policy for some time, but especially recently. In a January 13 statement, the civil liberties watchdog expressed frustration with the administration’s lack of transparency regarding drone warfare:

The American public has a right to know whether the drone program is consistent with international law, and that all efforts are made to minimize the loss of innocent lives,” said Jonathan Manes, a legal fellow with the ACLU National Security Project. “The Obama administration has reportedly expanded the drone program, but it has not explained publicly what the legal basis for the program is, what limitations it recognizes on the use of drones outside active theaters of war and what the civilian casualty toll has been thus far. We’re hopeful that the request we’ve filed today will encourage the Obama administration to disclose information about the basis, scope and implementation of the program.

Since a Department of Justice memo detailing the legal framework the White House uses to justify the killing of American citizens in league with Al Qaeda overseas was obtained by NBC News, the ACLU has been actively seeking more information on the program – to the point of suing the federal government. On February 5, the group filed court papers seeking to block the government’s efforts to have a 2011 lawsuit over the killing of Anwar Awlaki and two other Americans in Yemen dismissed. The ACLU cited new evidence in the form of the DoJ memo which say requires the suit to go forward.

“My initial reaction is that the paper only underscores the irresponsible extravagance of the government’s central claim,” wrote the American Civil Liberties Union’s Jameel Jaffer about the DoJ memo. “Even if the Obama administration is convinced of its own fundamental trustworthiness, the power this white paper sets out will be available to every future president.”

Even Fox News Channel’s Gretchen Carlson, co-host of the weekday version of the program Carlson guest hosted on Sunday, recently acknowledged that the ACLU has been critical of this administration’s use of drones.

Perhaps Tucker Carlson was not referring to drones. He referenced the Guantanamo Bay prison facility just before commenting on the ALCU’s general lack of criticism of the Obama administration. If he was talking about GITMO, there is even more evidence that suggests that civil libertarian group is uncomfortable with this president’s policies:

“Today, 166 men remain. Fashioned as an “island outside the law” where terrorism suspects could be detained without process and interrogated without restraint, Guantánamo has been a catastrophic failure on every front,” reads a section on the ACLU’s website called “GITMO on Obama’s watch.”

“It is long past time for this shameful episode in American history to be brought to a close,” the section reads before making a long and exhaustive case against the prison facility. “Guantánamo must close,” the ACLU declares.

Whatever your opinion of the ACLU, and many have strong opinions about the group, they have been consistent in their opposition to many of the methods that the Bush administration and the Obama administration have pioneered in their efforts to prosecute the war on terror effectively.