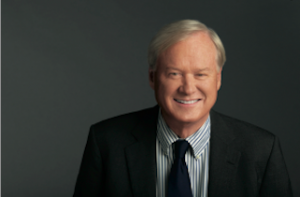 Hardball with Chris Matthews was the highest rated show across MSNBC’s schedule Tuesday in both the 25-54 demo and total viewers. Matthews had 210K viewers in the demo and 860K total viewers.

In his 7pm time slot, Matthews was #1 in the demo, beating out the Fox Report, where Jon Scott was filling in for Shepard Smith. The Fox News show was #1 in total viewers with 1.379M.