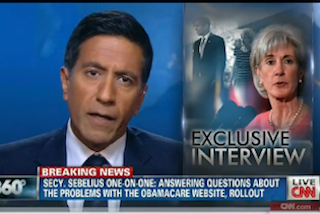 Dr. Sanjay Gupta’s exclusive interview with Secretary of Health and Human Services Kathleen Sebelius did little to boost CNN’s ratings Tuesday night. During the 8pm hour when the interview aired, CNN was #3 in both the 25-54 demo and total viewers, behind Fox News and MSNBC.