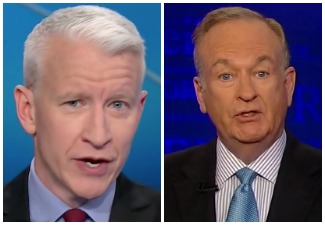 Anderson Cooper beat Bill O’Reilly in the 25-54 demo Tuesday night, with 452K viewers to O’Reilly’s 448K. O’Reilly, however, took the number one spot far ahead of the pack in total viewers, raking in 2.790K viewers to Cooper’s 873K. Earlier this month, Cooper overtook O’Reilly in the demo for the first time in almost a year, two nights in a row.