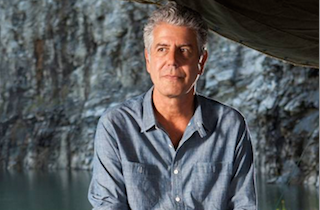 CNN’s new experiment of running repeat episodes of Anthony Bourdain: Parts Unknown during the 9 p.m. primetime hour did not work out too well on Monday night. But on Tuesday, Anthony Bourdain’s show ended up as the highest-rated show of the night for CNN in the 25-54 demo and helped lift CNN over MSNBC.

With 175K viewers, Bourdain came out ahead of MSNBC’s The Rachel Maddow Show, which had 145K viewers in the demo at 9 p.m. Fox’s The Kelly File was #1 with 238K. In total viewers, Megyn Kelly was in the lead with 1.598M, following by Rachel Maddow with 651K and then Bourdain with 308K.