Tuesday Cable Ratings: CNN Beat Fox in Demo for Every Hour of the Day 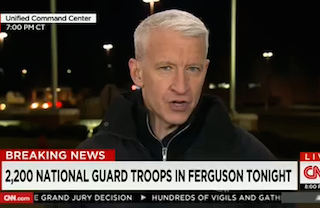 With continued coverage of the situation in Ferguson, CNN was the highest-rated cable news network in the 25-54 demo for every hour of the day on Tuesday, beating Fox News in both total day and primetime. Overall, CNN averaged 862K viewers in the demo during primetime, while Fox had 718K. MSNBC was third with 236K in the demo.