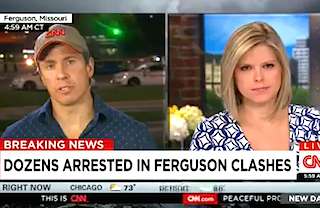 With near-continuous live reports from the ground in Ferguson, Missouri, CNN scored ratings victories over Fox News in the 25-54 demo in both the 6-9 a.m. morning hours and primetime on Tuesday. CNN’s New Day averaged 251K viewers in the demo Tuesday morning, beating Fox News’ Fox & Friends, which had 212K.

Fox News remained on top through the day and evening in total viewers. Fox & Friends led the morning with 926K viewers, compared to 581K for New Day. In primetime, Fox averaged 2.260M, while CNN had 1.197. In all categories, MSNBC came in third place.