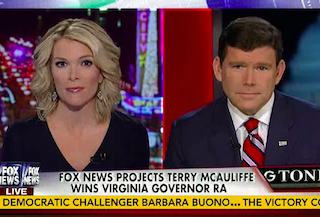 As election results were coming in Tuesday night, Fox News remained the highest-rated cable news network on TV and Megyn Kelly’s The Kelly File reached new heights in the 25-54 demo since its launch last month. Kelly’s 9pm show, during which she was joined by Bret Baier, was the #1 show in the demo on cable news with 654K, followed by Fox’s The O’Reilly Factor with 624K and Hannity with 498K.

During the primetime hours of 8-11pm ET, as the polls closed and election results were coming in, Fox News beat CNN, MSNBC and HLN combined with 593K in the demo and 2.729M total viewers.