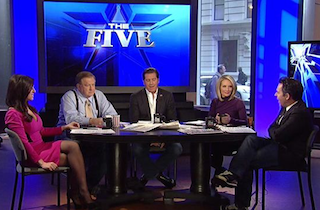 During the 5 p.m. hour Tuesday, when CNN was airing its town hall interview with Hillary Clinton, Fox News’ The Five was #1 in the 25-54 demo and total viewers. With 336K in the demo and 1.876M total viewers, The Five beat CNN, MSNBC and HLN combined in both categories.