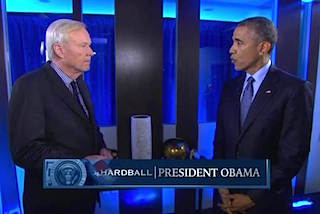 MSNBC’s Hardball with Chris Matthews hosted President Barack Obama for a roundtable discussion and interview Tuesday evening yet still came in third place in the 25-54 demo at 7 p.m. with 151K viewers, behind Fox News’ On the Record with Greta Van Susteren (262K) and CNN’s Erin Burnett OutFront (187K).

In total viewers, Chris Matthews‘ show came in second place with a strong 902K viewers, beating Erin Burnett (516K) but still trailing Greta Van Susteren (1.676M). Hardball still managed to get the highest ratings of any other MSNBC show in both the demo and total viewers, topping primetime hosts like Rachel Maddow.