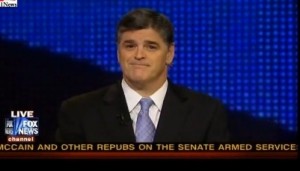 Tuesday evening, during the 9 p.m. hour, Fox News’ Sean Hannity reclaimed the top spot in the key 25-54 demo, beating out MSNBC’s Rachel Maddow (with fill-in host Ezra Klein) who had been winning in the demo for several nights in a row.