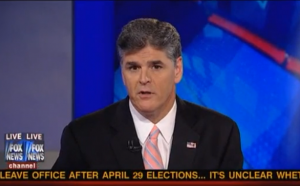 On Tuesday night, Fox News’ Sean Hannity had the highest-rated time slot in the demo, across all four networks. That, of course, was largely due to the Drudge-teased tape that was set to be released at 9 p.m. Hannity spent the better part of his show going through the video, joined by The Daily Caller’s Tucker Carlson.

In total viewers, Hannity came in second to colleague Bill O’Reilly, but not by much. Elsewhere, Rachel Maddow continued to be her network’s highest-rated show, while over at CNN the honors went to Piers Morgan in both demo and total viewers.