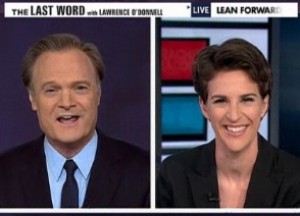 On Tuesday night, MSNBC’s Rachel Maddow and Lawrence O’Donnell again topped their Fox News counterparts (Sean Hannity and Greta Van Susteren, respectively) in the demo — with Maddow taking a nearly 200k lead over Hannity. Both he and Van Susteren came out on top in total viewers, but Maddow and O’Donnell remained close behind, with the latter falling 100k short.

Maddow again had her network’s highest-rated show of the night, in both demo and total viewers.