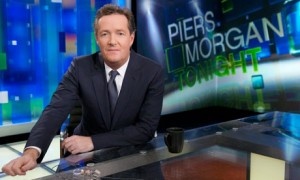 On Tuesday night, Piers Morgan once again topped CNN in both the demo and total viewers. In both cases, colleague Anderson Cooper came in second.

Elsewhere, Bill O’Reilly kept his top spot on Fox News — in both demo and total viewers. The Five was the second-highest rated show on the network. Rachel Maddow held the lead on MSNBC, with Lawrence O’Donnell and Ed Schultz coming in second and third respectively.