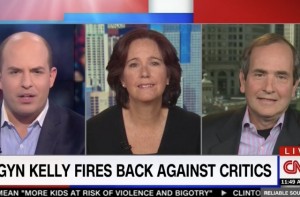 CNN’s Brian Stelter brought on two TV critics to respond to Megyn Kelly after she was, as Stelter put it, “so defensive” over her Donald Trump interview.

Kelly did confront Trump about his attacks against her and his general tone––expressing some serious concerns about what message he sends to America’s youth about bullying––but she did receive some criticism for going too soft and letting him off the hook a bit.

Kelly responded by attacking all the critics who wrote negatively about her as clearly harboring anti-Trump biases. Two of those critics, Poynter’s Jim Warren and LA Times‘ Mary McNamara, appeared on CNN this morning to respond.

Warren first dismissed Kelly’s criticism that he said the entire GOP is “anti-female,” saying he would never declare such a thing. (For the record, the column Kelly cited of Warren’s has him saying “the GOP’s anti-female brand is also locked-in.”)

He went on to say that the people she “aspires to be,” like Barbara Walters, never took criticism like this. Warren likened the interview to a Pentagon correspondent asking light questions of Donald Rumsfeld after criticizing him for months.

Meanwhile, McNamara said it was a case of false advertising where “everything was off the table,” despite promises to the contrary, and it hurt the brand Kelly developed in the GOP debates as someone willing to ask tough questions.

Stelter threw out the likely possibility she went “relatively easy this time” to get another tougher interview later. McNamara said probably, because this was probably just all about access.