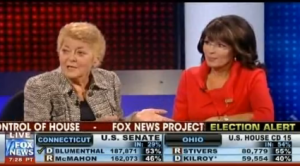 They also shared something else: The experience of running for higher office as a woman. The clip starts off with Ferraro minimizing the GOP wave of victory and politely disagreeing with Palin, who gave “Obamacare” credit for tanking the Dems, but they agree on the challenges of Running While Female. Megyn Kelly, after referencing the tribulations of Krystal Ball (“She had moronic college photos – she’s a Democrat”), asked the two women about their experiences. Ferraro said that not much had changed, and noted that she’d been “outraged by how Hilary had been treated during the primary”; Palin took the opportunity to wax feminist, thank Ferraro for her part in breaking the glass ceiling and invoking “the shoulders of Elizabeth Cady Stanton and Susan B. Anthony” upon which future glass-shattering women — like her! — would stand. Then Kelly if they thought they’d see “a female president in our time” and Ferraro hat-tipped coyly, citing 2012 or 2016, as Palin sat up straighter and seemed to actually smack her lips. It was…historic. The full clip is below; the feminism discussion begins at approximatley 5:50.