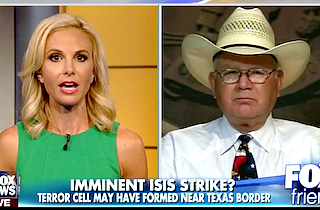 Gary Painter, Sheriff from Midland County, Texas, warned Fox & Friends’ Elisabeth Hasselbeck that not only was ISIS poised to sneak into the U.S through the porous Texas-Mexico border, but that based on evidence he’d heard of, “Muslims” were already being smuggled across. He presented no evidence that the alleged Muslims were connected to ISIS or any other terror group.

“Are you saying that ISIS is ready to come across poised to perhaps execute what they have threatened to do, attacks on the United States, drown us in our own blood?” Hasselbeck asked. “Is that what you’re saying?”

“I’m saying the border is wide open,” Painter replied. “We have found copies, or people along the border, have found Muslim clothing, they have found Quran books that are laying on the side of the trail. So we know that there are Muslims that have come across, have been smuggled in the United States.”

The idea that ISIS is operating in Mexico, or even outside the eastern Syria/northern Iraq region where they’re based, has been rebutted numerous times, most recently by the Department of Homeland Security, something Fox News itself has reported on. In addition, Fox News anchor Geraldo Rivera told the Fox & Friends troika last week that the idea was nonsense.

Nonetheless, Hasselbeck agreed with Painter’s dire prediction and asked what he thought the U.S. should do.

“If they show their ugly head in our area, we’ll send them to hell,” Painter said. “I think the United States needs to get busy and they need to bomb them. They need to take them out. I would like for them to hit them so hard and so often that every time they hear a propeller on a plane or a jet aircraft engine that they urinate down both legs.”