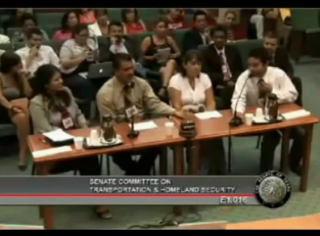 Texas State Senator Chris Harris shocked the members of his committee this week with a strongly-worded rebuke of a man who had come to testify against a proposed bill. Antolin Aguirre, the head of Austin Immigration Rights Coalition, chose to testify with a translator, as he had never done so before and felt more comfortable. This, to Sen. Harris, was “very insulting” given the man’s residence in the United States since 1988.

Aguirre began his testimony explaining who he was and why he was against the bill. When explaining that he had entered the country in 1988, Sen. Harris asked whether he spoke English. Aguirre replied (in English) that he did, but that he was not fluent enough to discuss the important legal matters at hand with the certainty he felt in his native language. “Why aren’t you speaking English then?” Sen. Harris demanded to know, adding, “that’s very insulting. You’ve been here 23 years.” The chairman of the committee stepped in immediately to distance himself from these remarks.

Needless to say that the Senator’s remarks have been met nationally with shock, as it is common practice for people who do not fully understand English to use translators who are specifically hired for that purpose. But while most concerns about Americans not speaking English (and yes, living for several decades in the country, Aguirre is an American) come from the position that, in order for a nation to hold strong cultures and values, everyone in the nation must be able to communicate in one language.

But here Sen. Harris clearly cannot be concerned with such things, as Aguirre obviously speaks English. That, to Harris, is more insulting, as if Aguirre had sampled the English language and simply didn’t like it. Anyone who has ever had to carry on a conversation in a foreign language class can conceive of how this is not the case. Think about all the times you had to explain the plot of your favorite movie or how many siblings you have to your high school French teacher. Now imagine having to do that in front of a legislative committee, but instead of talking about your little brother who likes Pokemon, you have to testify on complex legal issues that could affect the lives of millions of immigrants. No matter how many years of foreign language study under your belt, it’s a very daunting task. Most would say it’s a daunting task in their native language. No word on whether Rep. Harris has received any backlash on the matter yet, but it appears he has, at best, clearly misunderstood the motives behind Aguirre’s testimony.

Video of the testimony below: