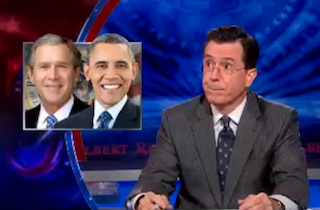 Stephen Colbert found himself conflicted on Thursday: He actually agreed with the two entities he hates the most. That is, President Obama and the New York Times. While lauding a spunky Obama for ignoring all the rules with regard to NSA surveillance, he also felt warm and fuzzy toward the Grey Lady for its “Obama bashing.”

“The National Security Administration is spying on our phone calls,” Colbert stated. “And unlike during the Bush administration, this time it’s the Obama administration. This guy, he is always trying to outdo his predecessor.”

Now understanding the document the Guardian reported on is no easy feat. So Colbert generously sought to explain the situation in layman’s terms — but found himself conflicted.

While tyranny may be cause for joy, Colbert was even more pleased with the New York Times for criticizing the administration. In fact, he made an fake on-set call signing himself up for a subscription. Fake? Not because it’s, you know, a TV show, but rather: “I just assume the NSA is listening and will pass it on.”

Logically, Sen. Lindsey Graham‘s argument made the most sense. “If you don’t have anything to hide,” Colbert contended, “people should be able to look at anything you’ve got.”