Glenn Beck On Jersey Shore “Why Would This Crap Attract 9 Million People?” 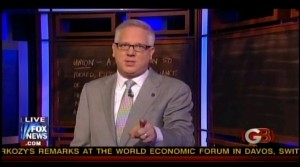 Yesterday, Glenn Beck gave his State of the Union. Today, he talked about the state of our union. There was a difference there, I promise. To sum it up; he’s very worried, hates Jersey Shore, likes some of YouTube but hates other parts of it, and doesn’t think we should see people as enemies. Unless they deserve it.

The enemy part was quite interesting. Beck explained that we are in danger of no longer being the great melting pot that we once were (demonstrated with a Schoolhouse Rock clip which was nice but not as fun as the fishstick cookie tray) because now we have so many people trying to turn us against each other and make us enemies. He launched into a monologue next that basically sounded like a Glenn Beck version of “Everybody’s Free (to Wear Sunscreen)”:

And, do you hear that noise? That’s a thousand websites and TV shows looking to find every instance that Glenn Beck has called or said someone was his enemy. I going to take a guess that there were at least a couple.

Now, the headline of this post promised Jersey Shore bashing and don’t think I’ve forgotten it. After all, dissing that show will probably be the only thing Glenn Beck says all year that I can agree with without any reservation. Yes, Beck got into the MTV and then entire time I kept regretting Steve and Glynnis were gone because a Beck vs. Jersey Shore argument probably would have caused a fist fight.

Beck then got into the subject of how people allow themselves to be swayed and allow themselves to be filled with “poison.” Some of them don’t even know they’re watching poison when they watch stuff like this. Stuff like…Jersey Shore. And what does it do to them? Well, it causes them to post videos on YouTube showing people fighting each other viciously. Beck then showed a few of said videos and talked about how the people have been warped by the need for instant fame.

“When you have the desire for fame and notoreity, and you combine it with a complete lack of priorities and values and principles, you’ve got a mess on your hands.”

But, Beck explained, we don’t want to ban YouTube or Jersey Shore. The problem isn’t the “tube” after all, it’s the “you.” Beck said he couldn’t even understand the people in the videos fighting and he didn’t want to. He didn’t want people to tell him he had to.

We can only assume that they all had terrible agendas.